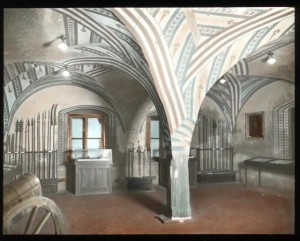 The Hussite tradition in the town of Tábor continued over centuries virtually without interruption. It came alive in the second half of the 19th century during the period of the Czech National Revival. During this period, Czech patriots became interested in history of the Czech Lands and their eminent ancestors. The citizens of Tábor followed suit and soon local secondary school teachers and university-educated townsmen formed a loosely knit group of enthusiasts with the aim to revive the historic traditions of their hometown.

It was, apart from others, a collection of antiquities housed in the building of the local grammar school that formed the foundations of the historic archaeological museum collection in town.

Early in 1878 František Farský, headmaster of the Higher School of Economics in Tábor suggested that “ ..following in the footsteps of other patriotic towns cherishing their glorious history, free of lethargy and indifference of our future ..it is advisable to establish a museum in our town…that shall afford truthful, extensive and pleasurable image of spiritual and tangible state of our town and surrounding landscape to educate and entertain folks either local or travelling from afar…” (written draft of the Friends of Science and Art Club in Tábor). After a number of meetings, members of the local authorities in Tábor on 6th December 1878 finally gave approval for the foundation of the Hussite Museum in Tábor. This date is, therefore, considered the foundation date of the museum. First, various collections were completed and appropriate premises identified. It took another six years before the museum opened to public. 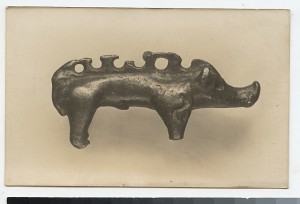 In 1906 the museum committee organized a theme exhibition devoted to John Huss, 15th century Czech church reformer. The exhibition was impetus for further development of the museum. Consequently, the area of exhibition premises began to expand. They included the historic town hall built in late Gothic style located in what is today Žižkovo Square as well as Bechyňská Gate that is considered one of the most significant monuments of the medieval town fortification system. At the beginning of the 1990s the office of management and individual museum departments relocated to a newly renovated building of a disused Augustinian monastery at Mikuláše z Husi Square, including the museum depository, archives and extensive library. Collection efforts that have spanned for decades resulted in accumulating a great number of exhibits embracing all possible human activities, therefore, it is understandable that only a fraction of collections may be on public display. 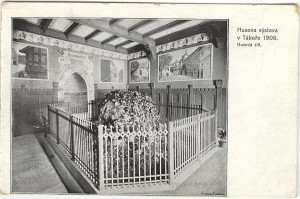