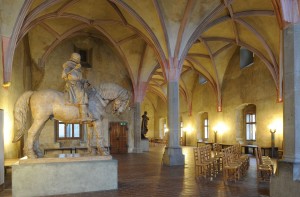 The Great Gothic Hall inside the Old Town Hall is the second largest of its sort in the country. The most valuable relic to be seen is an emblem carved in stone featuring the figures of Jan Žižka and Jan Hus. The Old Town Hall in Tábor ranks among the most significant secular structures of the late Gothic period in the Czech lands. The construction works on the Old Town Hall were finalized in 1521 under the supervision of architect Wendel Roskopf. The building was later renovated in the Baroque style and in 1878 it was reconstructed by architect Josef Niklas in the pseudo-Gothic style and  remains unchanged until today.