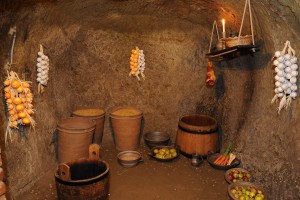 Large cellars that were carved out in bedrock in the depth of as much as 16 metres below the ground are a remarkable industrial relic of the late medieval period. The guided tour that was open to public in 1947 after cellars under Žižkovo Square became interconnected covers approximately 500 metres of distance. The underground tour begins inside the town hall and exits in house number 6.

From the very beginning of the Hussite settlement, the town cellars mainly served as important utility area. Apart from storing foodstuffs and water, they could be used as a hideout from invaders and, most importantly, as shelter from devastating fires that destroyed the town on several occasions. The extent of the square area of the Tábor underground is remarkable. Some historic sources maintain that the overall distance of the underground corridors is as much as 14 kilometres. In some places, the underground area is divided into three storeys. The temperature oscillates around 10 °C all year round. In 1947, Vojtěch Kraupner, a local architect, initiated works on interconnecting cellars of several houses, thus creating a tour circuit approximately 500 metres long. It begins inside the underground of the Old Town Hall as part of lapidarium and follows the line of houses on the south and east side of Žižkovo Square. The tour ends in house number 6 on the northern side of the square where a modest exhibition documenting work in the underground in the 15th century is located.