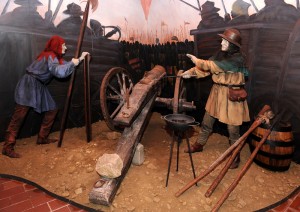 The exhibition begins with a film describing the background that led to the outbreak of the Hussite Revolution. The historic atmosphere comes alive in the individual exhibition halls where different themes of the Hussite Movement dubbed – Roots of the Revolutionary Movement, the Hussite Warfare, Military Leader, Searching for King, On Own Way, Memory, Town with the Emblem of Chalice – are presented by means of texts, images, exhibits, as well as by means of films, commentated slides or animated video clips.

Young visitors will appreciate boards with narrative cartoons that will help them to become familiar with the key terms of the Hussite Period. They can try on a ring armour or experience sitting on a royal throne.

This part of exhibition also features concealed drawers with assignments for visitors or humorous scenes in peepholes.

The exhibition is wheelchair accessible, for the blind and visually impaired guide texts in the Braille are available. There are audio guides available in English, French, Russian, German, Japanese, Spanish, Korean and Dutch too.